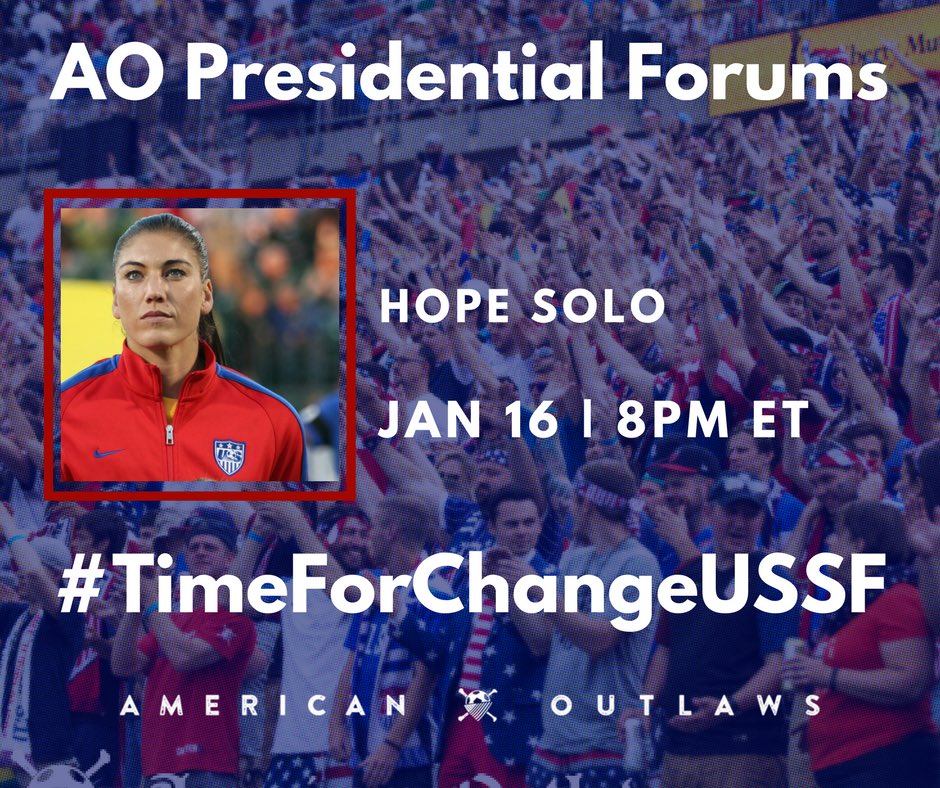 The result below is Hope Solo’s own words in response to questions from AO. These questions were culled from issues based on a survey we sent to our members in late 2017.

What leadership experience and leadership style makes you qualified to be USSF President?:

The same qualities that made me the best goalkeeper in the world, will define my leadership as President — an unwavering commitment to being the best day, an unbreakable work ethic and the desire to make everyone around me better. The best, most qualified person for the job, will be the best leader.  Instead of speaking more about what qualifies me, I would like to share a letter from someone I greatly admire and respect, former NASA Astronaut Ron Garan, and someone I have had the honor of working with through the global organization, One Young World:

To Whom It May Concern

RE: Hope Solo Recommendation for President of the United States Soccer Federation

This letter recommends Hope Solo for the position of President of the United States Soccer Federation. I have known Hope for the past two years and have worked with her on the One Young World program. One Young World is an international youth leadership program that brings together young leaders from literally every country in the world. The goal of the program is to inspire in these young leaders collective action toward solving the most pressing and seemingly intractable problems facing our world.

Through the One Young World program, I have witnessed firsthand, Hope’s extraordinary leadership qualities. She has the innate ability to inspire and motivate positive action. Her fearless dedication to the ideals of equality, justice and diversity will serve her well as the President of US Soccer. She has the ability to see straight to the heart of a problem and has the courage and tenacity to initiate real lasting solutions—not Band Aid fixes.

During my time as a US Air Force Test Pilot, NASA Astronaut and now as a test pilot in the commercial spaceflight industry I have met some extraordinary leaders. Hope is among the very best I’ve ever met. At One Young World she served not only as a mentor for young leaders but also a powerful advocate for important causes. I see her being that same strong advocate for the values and goals of US Soccer.

Hope is the perfect person to increase US soccer viewership, grow the fan base, address issues of inequality and discrimination, and raise the overall level of play by revolutionizing youth soccer clubs and programs. I have the highest confidence that Hope will do all this with an unmatched level of transparency and openness.

Hope has too many incredible attributes to list in a short recommendation, but I would be happy to discuss Hope’s talents, motivations and accomplishments by phone. Hope has my highest recommendation for selection as the next President of the US Soccer Federation.

What changes will you make to youth development in this country? Can you provide a timeline of the changes that you envision?

We cannot let players slip through the cracks and this is an issue that must be tackled immediately.  We cannot expect that the best and most talented players are only playing for the top clubs or developmental academies.  We must broaden our reach, and to do that, USSF must use the surplus of funds to give state associations money to scholarship kids.

The State associations do what they can to serve all communities, but with very little support from the Federation.  This is unacceptable.  It’s also an arrogant and classist belief that we only need to scout players from the “super clubs.”  Skilled players could be found in every corner of America.  We should no longer be recruiting kids to play for one team in every state, and creating the “super clubs”.  This does not help build character, and does not allow these youth players to be “battle tested.” Often times, these teams win games 6-0 or even greater.  We need talent spread throughout the state. WE need parity, and we need to end the ruthless recruiting.

There are so many kids with great ability and skill whose parents simply can’t drive them an hour and a half or spend $15,000/year for tournaments, travel and hotels.  We must give the game back to the communities.  We have shut the door on too many talented kids, and have left behind so many gifted kids.   The process has to be inclusive and the whole system must be reviewed immediately.

In what ways will coaching in the United States change under your leadership?

Not only have we shut the door on talented players, we are also failing talented coaches. Why do we only have 3,000 A level coaches in America, yet a small country like Spain, has approximately 20,000 high level coaches. Our coaching courses and curriculums have become exclusive, and are too expensive.  Until we make the coaching curriculum more accessible, we will continue to have F licensed coaches coaching from U-8 all the way up to u-18.  Coaches should be able to have an easier pathway to climb the ladder and improve on their coaching.  This will directly impact the development of the youth.

The current pricing structure for many U.S. Soccer games makes it difficult for the emerging fan, the diehard fan, and families to access National Team games regularly. What will you do to address affordability and access to games?

We continually hear that U.S. Soccer’s mission is for soccer to be the preeminent sport in the United States. This is impossible if we don’t make the game accessible to all.  The game as a whole has become exclusive, everywhere from player development, to coaching, to even the fan base. The USSF has decided not to be inclusive and chooses to put profit before progress, despite its very own mission statement.  I would look to decrease ticket prices and market men’s and women games equally.  I expect both teams to sell out stadiums with earlier announcements of games, more marketing, and less expensive tickets.  I will also have the Federation donate tickets to local teams and their families in underrepresented areas for every game across America.

Describe what you will prioritize when choosing cities/venues to host matches for our national teams.

The priority will be stadiums with suitable grass fields, and I will not discriminate any city or state.  Soccer United Marketing will not be responsible for choosing game locations. If soccer is the world’s game, we must make it America’s game, and to do that, we must play in as many states and cities as possible that already have safe stadiums. The reason this doesn’t currently happen is because soccer minded and passionate people are not the ones making these soccer decisions, and once again excluding so many Americans from having an opportunity to experience a live game.

How do you envision the ideal game day experience for fans attending a U.S. Soccer game?

How will your presidency incorporate the views of fans and include them in the governance of U.S. Soccer?

Everybody has a voice, and anyone vested in the game with a passion for growing the game should be heard. Fans have enormous strength in numbers and this group in particular, the American Outlaws – you’ve built a national organization that is part of the fabric of every game and a massive platform to be heard.  Your voice has weight and anyone in a position of leadership should listen. I would want the fans to continue to raise the issues most important to them and ensure they were taken into consideration within the decisions made around game day experience, accessibility, and more.

Why should fans unite behind your candidacy for U.S. Soccer president?

I believe fans want somebody who will fight for change that considers the needs of everyone who plays a role in its success. Fans deserve the best experience possible, specifically a team that wins. I have a long history of making sacrifices to force change, and I will continue to fight to make sure we all have the opportunity to contribute to the game’s overall success.  No other candidate can say they risked their own careers to fight inequities and stand for what’s right.

NOTE: Hope Solo will be taking questions from AO members in a LIVE, moderated online forum on Tuesday, January 16th at 8pm ET. This will be an AUDIO ONLY forum. All members were emailed a link and password on Monday to participate in viewing the forum, submitting questions to Ms. Carter, and listening to his answers. The general public will be able to view this forum in the days that follow.