The recent 23-man roster released ahead of the USMNT game against Paraguay on March 27th will feature a whole lot of new faces. In fact, head honcho Dave Sarachan (whose role as head coach was extended through June) has brought seven uncapped players into the fold for the game in Cary, North Carolina. Not to mention players like Kenny Saief and Zack Steffen, who each have a single cap to their name.

A lot of the newbies in the setup this week aren’t household names, but that doesn’t mean there isn’t much to be excited about – these are young guys rising up the ranks at their respective European clubs and raising eye brows around the globe. Let’s take a look at what these guys are doing on the field for their respective clubs and what you can expect when they don the crest for the first time.

Okay, go ahead and get all the U2 jokes out of your system. You good? Good.

Alex Bono is a 23 year-old, tall shot-stopper currently playing for Toronto FC. The New York native broke into the first team back in 2016 when he made 15 starts and saw his minutes nearly double last year when he started 28 games for the treble-winning team.

Since 2016, he’s managed 14 shutouts in 45 starts, allowing 51 goals and making 118 saves. This is his first look at the senior MNT since getting called up fresh out of college in 2015. He’ll have a tough time leap-frogging fellow keepers Bill Hamid and Zack Steffen on the depth chart, but if Bono scores some minutes in Cary you’ll see big keeper with quick reflexes and confident coming off his line.

Check out highlights from one of his shutouts below but first here’s Bono as a US keeper because COME ON. 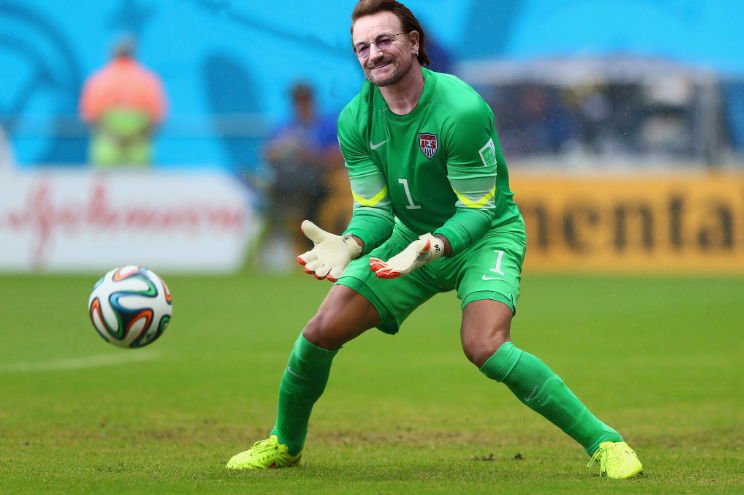 Add another great name to the roster. We promise we won’t photoshop Shaq’s head on a USMNT body though.

Shaq Moore has been quietly been building himself a reputation for La Liga side Levante. The 21 year-old right back garnered the attention of European clubs after impressing in youth tournaments with the US U-18 and U-20 squads. After spending time bouncing around lower-division sides, he made his senior debut for Levante in 2017 and has made 7 appearances for the club this season, including a start against Barcelona at Camp Nou.

Look for Moore to deputize the more experienced Deandre Yedlin on the right hand side. As a strong defender, Moore could see minutes for the USMNT to help protect a lead or shutdown a tough winger. Watch him talk about his journey to Levante’s first team below and you know what screw it here’s Shaq’s head on a USMNT body.

The man so nice they named him twice. EPB has a vast amount of experience at the youth levels of US Soccer, evening captaining the U20 side that made it to the World Cup quarterfinals last summer.

Palmer-Brown kicked his career off in 2013 at the ripe age of 16 as a homegrown player for Sporting Kansas City and the youngest signing in the club’s history. The 20 year-old center back made 20 appearances for his hometown club, and during his four year stint spent some time on loan with Porto’s B side in Portugal. At the end of last year, EPB made the move abroad, signing with England’s juggernaut Manchester City. Currently, he finds himself on loan with Belgian side K.V. Kortrijk.

Palmer-Brown is a calm, intelligent defender who likes to be on the ball, make passes from the back, and can even slide into the midfield in a pinch. Check out some of his highlights in the video below.

One of the more surprising names on the roster this spring is Everton left back Antonee Robinson. The Blues sent him on loan to Championship side Bolton this season, a move that has proven to be beneficial to the 20 year-old’s development as he quickly became the team’s first choice left back.

Robinson is filling the star spangled-shaped hole left in Bolton fans’ hearts since Stu Holden left the squad, and he currently leads the club in assists. With a somewhat grab-bag of players filling in on the left hand side for the USMNT over the last couple years, he looks poised to fight for a role in the squad right away. As a Lacey player who likes to get forward, we wouldn’t mind seeing him and Yedlin giving fullbacks nightmares for years to come. Read what a Bolton fan told the Liverpool Echo about Robinson’s performance this season here.

Another youngster being developed north of the border, Marky Delgado helps run the show in the midfield for Toronto FC. The California native has featured in the U-17, U-18 and U-20 setups, and earned his first call up in January, although he failed to see the field in Carson.

Delgado broke through a TFC team crowded with talent last season, making 29 appearances, scoring three goals and contributing five assists during their run to the MLS Cup and Supporter’s Shield. A clever player and accurate passer praised by his coach for his quick play, Delgado could be a player for the US who helps breakthrough crowded midfields. See him in action in the highlight video below.

Not much to say about Tim Weah, other than, ya know, the fact that his father is a Ballon D’or winner/President of Liberia and he’s now getting minutes for one of the biggest clubs in the world.

Weah, who just turned 18, is having a year to remember. The Brooklyn kid netted a hat trick against Paraguay in the U-17 World Cup last year and made his first appearance for the French giants Paris Saint-Germain just last month, where he looked impressive as a late substitution. He’s a dynamic player who can play multiple positions, but has found success cutting inside from the left wing. Look for him to shake up the USMNT attack with clever movement and a nose for goal in the coming games. Check out his touches in his first Ligue 1 game in the video below.

Andrija Novakovich is a giant, Wisconsin-born striker with a Serbian accent who bags goals for fun. What else do you need to know?

Okay, we’ll give more context. The 21-year old stands at 6-foot-4 and plays for Reading. Right now, he’s on loan to second-division Dutch side Telstar, where he’s netted 18 goals in 29 games. Novakovich made his way to southern England via Milwaukee, where he lived until 2015.

Despite his massive stature, US coaches have been impressed with his technical ability and footwork. Look for him to offer a different option to the other forwards on the roster, Rubio Rubin and Bobby Wood, who are both under 6 foot. See him in action below.

For more info about this squad, check out the infographic below!