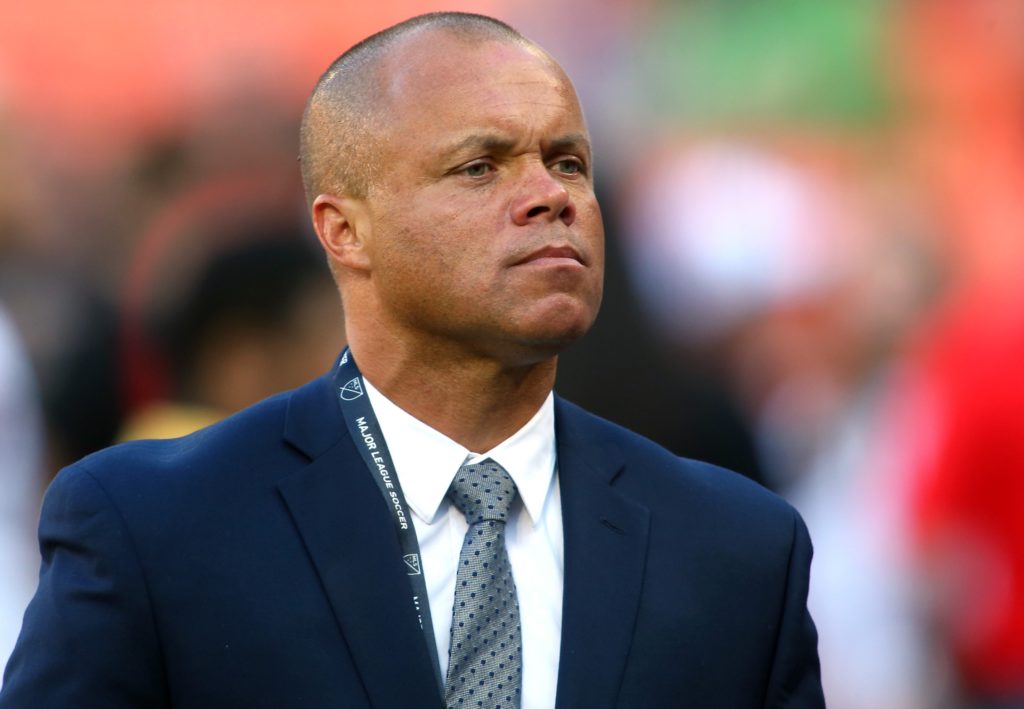 Other than our perpetual pain, sorrow and embarrassment, one of the new developments to come out of the USMNT missing the World Cup has been the invention of a new General Manager position in the U.S. Soccer hierarchy for both the men’s and women’s teams.

Much time has been spent has dissecting the the position and who would eventually occupy it. While the former is still very much a mystery, we now know the answer to the ladder when it comes to the men’s team. Philadelphia Union Sporting Director and former USMNTer Earnie Stewart was tapped to fill the job last month. Stewart has great deal of experience repping the red, white and blue, having played for the team from 1990-2004 and representing at the ‘94, ‘98 and ‘02 World Cups.

But now that we have a name and a face to put to the position, one big question still exists. A question that was first posed by “The Bobs.”

Luckily, unlike the employees of Initech, we’ve gotten some clues as to what the job entails. Reports have detailed the responsibilities Stewart will take on, and we’ve heard it straight from the horse’s mouth, too. Those duties include:

Reporting from ESPN’s Jeff Carlisle gives additional context to what Stewart will have control over specifically, based on an explanation from USSF Chief Sport Development Officer Nico Romeijn. Here’s what he found out:

“The GM would research potential candidates, help compile a short list, and be an important part of the interview process, but that the ultimate decision would lie with the USSF Board of Directors. With regard to staff, Romeijn said he expected that the new manager would bring in some of his own people but that it’s not a given that all of the staff from the previous regime would be fired and thus start over from scratch.”

What we can gather is Stewart will now be taking on a job previously done by USSF President Sunil Gulati and CEO Dan Flynn in a move that newly-elected President Carlos Cordeiro says puts power back in the hands of “soccer experts.” While helpful, this still doesn’t give a whole lot of clarity as to the other vague duties that will fall under Stewart’s purview. He recently answered questions on the US Soccer website to clear some things up. His answer on the responsibilities he’ll have:

“My responsibilities as a general manager are focused on the U.S. Men’s National Team. Everything that has to do with the team, from the scouting process to getting players into camp together with the head coach of the National Team. We want to make sure there’s a clear process for our style of play, that there’s a clear process of the way we want to play and make sure that we win games.”

Prior to Stewart’s hiring (but while rumors made him the inevitable hire) we spoke with former USMNT player, USSF Presidential Candidate and NBCSN analyst Kyle Martino about his thoughts on the position.

“I still have a lot of questions,” Martino said. “It’s a good sign the role has already evolved a bit since the board voted to approve the position back in November/December, but I believe it is still too vague in description and narrow in scope. USSF has been in desperate need of a respected technical mind to run/oversee strategy previously handled by a handful of people without qualifications in that area.”

Martino added that while he has reservations about the role, he’s got confidence in Stewart’s ability and instincts when it comes to the job.

“I’m concerned the role lacks the requisite authority and jurisdiction to affect lasting change,” Martino said. With no youth oversight, authority and reporting to senior figures with limited technical knowledge, this could be an expensive cosmetic improvement. This isn’t quite the ‘soccer experts running soccer operations’ but definitely a step towards that, which is a real positive. Knowing Earnie, I doubt he would take the role if he didn’t believe he could effect change once inside.”

“I’ve known Earnie a long time. We met playing for the USMNT together and share mutual friends. Earnie has a terrific reputation and pedigree and I feel he can do a great job. I want to see him fight to change the toxic culture that has metastasized within USSF. If successful he will leave a role that is central to the health of US Soccer moving forward. It definitely won’t be easy though.”

In his US Soccer Q&A, Stewart laid out what he’s looking for when it comes to hiring a head coach.

“One of the things that I’ve seen over my career is that you have to be a really good people manager. That’s one of the qualities that a head coach of the U.S. Men’s National Team must have. There’s also the other part to make sure that our style of play, the way that we want to play during the game, the tactical principles that we have, that you see those on the field. Being able to implement those things in just a week, maybe 10 days, is something that points to the tactical knowledge of a coach. The combination of those two are really important, and there’s a whole other list that comes after that.”

For some good analysis on Stewart’s interview, check out Donald Norman’s breakdown in this Twitter thread.

Stewart is set to take over the job on August 1st. This was somewhat surprising to some fans, especially those who expected the federation to jump on newly-employable candidates fresh from the World Cup. Those expectations were put to bed when interim coach Dave Sarachan reportedly signed on to extend his role through the end of the year, but now we have a more detailed picture of the timeline and type of candidates that will be sought after.

And while much of the focus has initially been on Stewart’s hiring, the World Cup champion, number one-ranked USWNT has the same role to fill, and has garnered little national attention. Martino worries the team’s success could breed complacency when it comes to filling the position – one that he thinks should have been the first priority.

“It’s easy to look at the women’s success and feel less urgency,” he said. “But if you look at the youth pipeline on the women’s side, the problems with girls DA and the gap closed by our international competitors, you can make a strong argument that USWNT GM role is more crucial right now.”

The apparent slow action on filling the USWNT role and the lack of clarity around the USMNT GM’s duties have left many fans wondering a simple but massively important question – What’s the plan?

While the men have seen a youth-heavy team take the field this summer, large-scale questions beyond the first team selection are still seemingly in limbo. What are the specific criteria for a new head coach? What is the timeline for filling the role permanently? What are the expectations for the team going forward, and when should the fans expect to see results and progress?

For the USWNT, what is the timeline for filling the GM position? Will he or she have the same responsibilities as Stewart? What work is being done in the youth system to ensure the team is maintaining its world-leading advantage in? What new leaders will emerge as a legendary generation ages? How are the players’ concerns regarding pay and playing conditions being addressed?

While we ask questions like The Bobs and fans are slowly but not-so-surely get answers, you can’t help but continue to see similarities between our federation and Office Space. Please don’t be a Peter Gibbons.