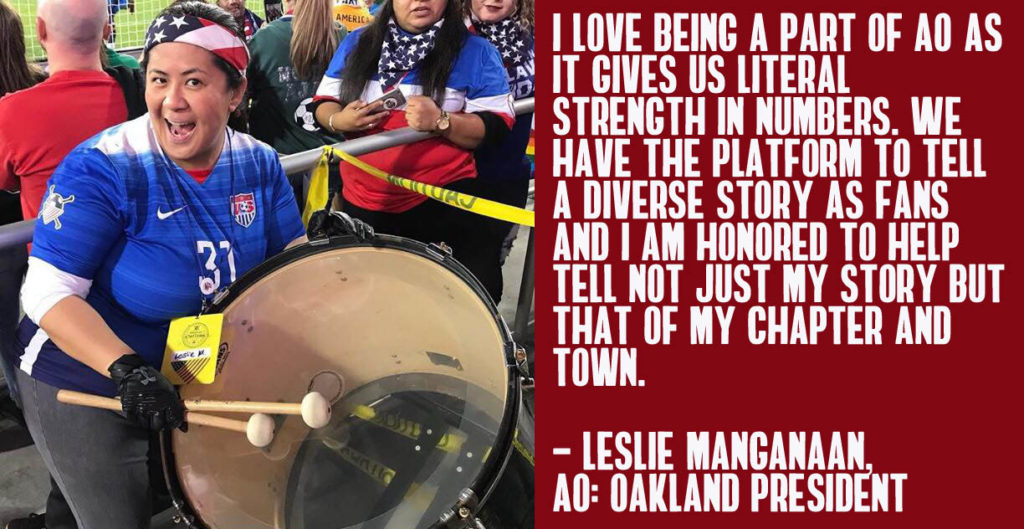 One day I went to a San Francisco Giants game with a few people including Heather (AO Oakland), Philip (AO San Jose), and Erin (AO Indianapolis) for Full House Night. Not only did we get Full House snow globes but the cast was there filming Fuller House in between innings. The crowd was told to boo Stephanie Tanner when she sang “Take Me Out to the Ball Game” but we ended up just laughing instead.

Clint Dempsey’s go ahead goal vs Portugal, 2014 WC. My celebration was more funny than crazy since I was at the AO San Francisco bar and they were recording the crowd the entire game. I went through so many emotions and facial expressions as the ball was passed/deflected in the 18. When Dempsey finally scored I pushed/chest bumped my cousin out of frame and into the bar. The place was so packed the crowed started swaying and the floor was so slippery (from the beer shower) that I had to hold on to a pole to make sure that I didn’t fall over behind the bar.

In 2012 I was in my break room at work with a visiting manager from the Central Valley. I wanted to show him that the clock in the room was wrong so I showed him the time on my phone which also had the U.S. soccer don’t tread on me logo as the background. He flipped out, got in my face and yelled, “YOU’RE A US SOCCER FAN?!?!” Knowing that there are more Mexico fans in the area and this guy can easily pick me up and throw me, I quietly said yes. To my surprise he yelled back, “I’M THE VICE PRESIDENT OF THE AMERICAN OUTLAWS IN MODESTO!” And that’s how I was recruited to AO by my big bro Javier Torres.

I want to go and watch the USMNT in the World Cup! I wasn’t able to go to Brazil at the time.

Megan Rapinoe. A. She is an amazing player (Please see “The Cross” 2011 WWC quarterfinals vs Brazil and 2012 Olympics Semifinals vs Canada) B. She’s from NorCal C. She is extremely personable. I meet her at an event and it’s great to see that she is as good as person off the field as she is on the field.

Honestly I’m happy with my AO family. I feel like NorCal is just one big chapter. We are all friends and try to attend each other’s chapter events as much as we can. As volunteers we all dedicate so much of ourselves in this organization.

Hands down it was when the USWNT won the Women’s World cup! I had such an AMAZING time in Canada during the tournament but that day was special. I was almost trampled leading the march into the stadium and Eboni (AO Raleigh) and I were trying to capo sharing 4 seats with 5 other people from the media. It was all worth it watching those players lift that trophy up.

There are two memories that stand out. First, our youngest member Alex raffled off his signed Pulisic jersey to help victims of hurricane Maria in Puerto Rico. The raffle went viral reaching Christian himself and we were able to raise $3200 for Puerto Rico.

Second, after the tragedy at Pulse in Orlando I suggested that we sing a song as tribute 4 days later during the USMNT Copa game vs Ecuador. With the help of other chapter leaders across the country we sang “You Are My Sunshine” at the 62nd minute at the stadium in Seattle and in AO bars across the country. That song means so much to me and my family as well so I was getting all teary eyed putting together the montage video for AO.

Technically Philly since it’s almost 3000 miles away but Winnipeg felt further since the airline lost all of my luggage including my carry on!

What’s better than getting 4 stars?