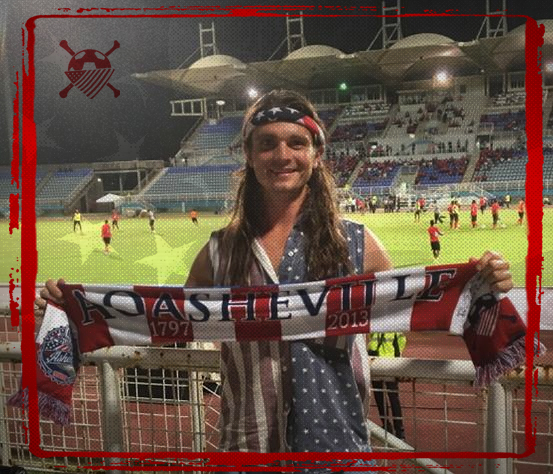 I possibly could have caught Clint Dempsey’s header in the COPA America quarterfinals in Seattle in 2016 if it hadn’t hit the net. It was special to me because it was my second cap, and first experience in the AO section. That was a big win over Ecuador and another bright spot in a murky last couple of years. I don’t even remember the celebration.

It’s not that weird, but I wear the same Jon Fishman blue and red donut-patterned socks to every match in the hopes that the band Phish may one day take notice.

I was a late joiner compared to the length of my fandom. So I grew up playing and started following the National Team around the 2002 World Cup. I followed more than just every 4 years, however, I didn’t become a die hard for quite a while. Our AO Chapter formed in 2013, but I wasn’t a part of it from the outset. It sort of fizzled for a couple of years and had very sparse meetings and attendance, which is strange because soccer is by far the most prevalent sport in our area. I first got involved with the inauguration of our local team, Asheville City Soccer Club, helping form the supporters group, South Slope Blues. The team really brought together our already thriving soccer community and in turn reignited our AO Chapter. This is when I officially joined and became very active. Through this process over the last year or two I have met some of my now closest friends.

The optimist in me wants to set the longterm Disney goal of being present for a World Cup Final victory. That has to be every soccer fan’s hope. But I want to be more realistic for the time being (especially after the recent humbling qualification experience) and wish to just be a part of a World Cup in general. I don’t mean for the team, I’m not quite that cynical. I’m confident they will be back in 2022. But I personally want to be a part of the excitement by being present at every World Cup (that we attend) from here on out.

Darlington Nagbe is my favorite player, although it was a major dagger when he signed with Atlanta. Being from NC, I am eagerly awaiting an MLS team here, and thus the future heated rivalry of NC-ATL is already instilled in me. Oh, and Darlington, I will be coming to see you play again when the Timbers visit Mercedes-Benz Stadium in June. Still not sure what I’m hoping for in that one.

It may sound cliché, but I don’t wish anymore from this community right now. I’m still in a very extended honeymoon phase with it. A lot of that has to do with the wonderful people in my chapter. And I’m sure down the road I will develop more desires and opinions, but not currently. I’m perfectly satisfied.

My happiest moment as an AO member was this past October at the 4-0 trouncing of Panamá in Orlando. I was with a great group of friends, the crowd was raucous, and everything was looking pretty stellar that night.

My most impactful memory coincides with how far I’ve traveled for a U.S. game. I was fortunate/unfortunate enough to make the trip to Trinidad and Tobago in October. Despite being possibly the darkest day in U.S. Soccer history, I don’t think it set in correctly for me. In fact, I still don’t think it has, and maybe never will. I would have been decidedly more impacted and depressed if I had been watching it at my local chapter bar (or brewery), New Belgium. To this day,

I only think about the experience revolving around all of the AO family members I met while being down there. I’m not able to dwell on the result or its effects for very long because I keep going back to everything I loved about the trip. Part of that is just how new it all was to me. Part of it was how nice almost all of the Trinidadian people were.

I know I’m romanticizing the whole thing. But it was my first away cap and the 80 or so Americans that made the trip were among my favorite folks I’ve been around to date. I found my people down there. I’m hooked. I still keep in touch with quite a few of you guys regularly, knowing the next run will be a great reunion. And a more positive one at that. Surely, it’s only up from here.

Shameless and unsolicited plug coming:  I want to encourage anyone on the fence of making an away trip in the future to jump. For any fan like me that had been to a handful of matches over the years, but couldn’t convince themselves to try out the road run – please, do yourself a favor and join the crew the next go ‘round. Pulling the trigger was the best decision I’ve made in recent memory. And if that still involved the worst day U.S. Soccer has arguably ever seen…well, you get the point. I do want to apologize, though, to the country for jinxing our WC chances. I put in for tickets to Russia on October 9th in the hotel in Trinidad. For that I am eternally sorry…Whoops.

In the next 4 years I want a couple of things. First and foremost, I want my state to step up and legitimately work toward securing a MLS club, and be an integral part of the growth of the Beautiful Game in this country. It’s obvious many major strides need to take place at all levels for this nation to meet the standard the rest of the world has set. I’m not going to say anything that all of the Outlaws don’t already know or have strong opinions on one way or the other. But I do want to reiterate to everyone that it does start with the individual, and it’s time to get to work. Regardless of what that means for each person, we all truly have a part in this. And I want to be a part of the generation of U.S. Soccer that planted the seeds for real, lasting growth and progress. This is as pivotal a time as we will likely see. Let’s keep it simple and chip away at at it everyday. These next 4 years are extremely crucial to that process.