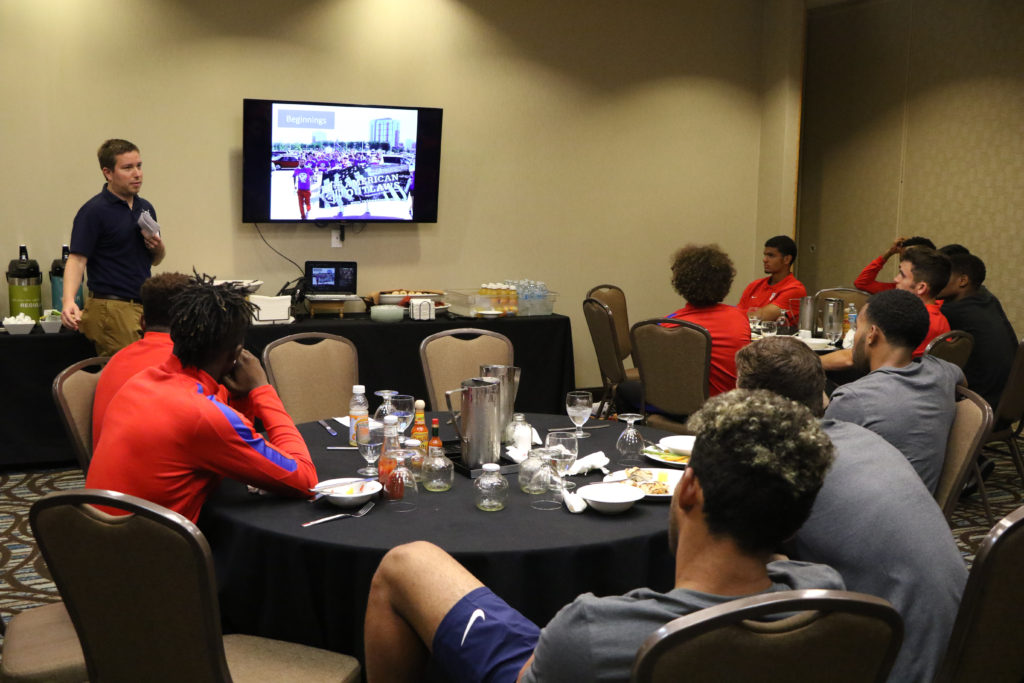 As a guy who has been a fan of Tab Ramos for as long as I can remember (well, since I was 12), I was elated when Tab Ramos agreed to do a presentation on Youth Development at the AO Rally in Austin. There is no one in America more qualified to speak about how we cultivate our young soccer talent in this country, and we were lucky to have him. We also learned that he and Jimmy Conrad dont agree on everything.
So you can imagine how honored I was to accept an invitation from Tab to speak on behalf of AO to the U20 team this week. I still kind of can’t believe it happened, but on Monday (June 27), it did. The team is in LA for the 2016 NTC Invitational tournament, where they will face Costa Rica tonight (streamed live on ussoccer.com), and Tab thought it would be beneficial to the players to see some more sides to AO; to see that there is more to AO than a section of singing fans behind the goal.
The focus of my 20 minute talk was to get across a few key points: 1) tell the tale of AO’s beginnings and history 2) our core values, such as “Unite and Strengthen,” inclusiveness, AO Family, philanthropy, etc., and 3) that their hard work matters to a lot of passionate people.
The players were all aware of AO before I arrived, but seemed pretty genuinely interested in our story. The moment of the night for me was as I was leaving, one of the players (JT Marcinkowski) stopped me and asked me to thank the San Jose chapter for tweeting congratulations to him when he gets called up to the national team. He said it meant a great deal to him that they do that. So once again I get to take credit for the great work of our amazing AO Family!
Thank you to Tab and the U20 Men’s National Team and coaching staff, AO San Jose, and all the #AOFamily for making this once in a lifetime opportunity happen!
Check out the pictures of the talk below, and this video of James Corden talking to the England team that I used for my inspiration.