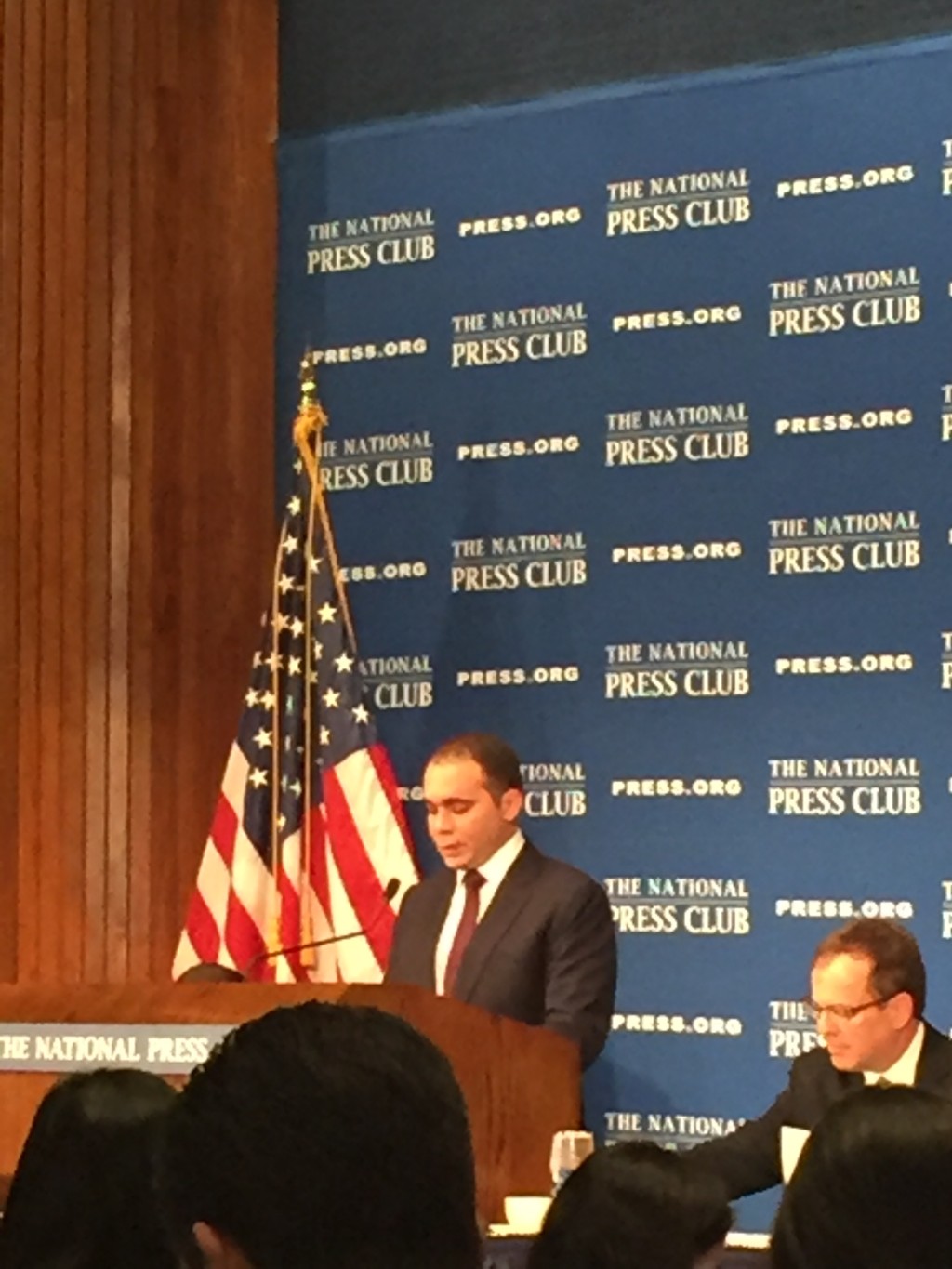 On Friday, December 4th, members from AO Annapolis, AO Baltimore and AODC were present at The National Press Club in downtown Washington, DC to attend a NPC Luncheon featuring FIFA presidential candidate HRH Prince Ali bin Hussein of Jordan as the keynote speaker. The event was part of Prince Ali’s tour surrounding his quest to become president of FIFA in elections set for February.  With several dignitaries among the people seated in the packed Press Club ballroom, including former USWNT stars Lori Lindsey and Mary Harvey, Prince Ali gave brief remarks about the state of FIFA and general thoughts about how he was the best candidate to replace the suspended Sepp Blatter as FIFA President and bring the change to FIFA’s governing structure that is much needed.

After concluding his speech, Prince Ali took several questions from moderator John Hughes, president of The National Press Club. Some questions were submitted ahead of the keynote address, while others were written down on notecards provided and handed to Hughes for inclusion in the question & answer session. Many of the questions naturally focused on the corruption scandal that is currently plaguing FIFA, leading to several arrests by the FBI as well as Swiss officials in recent days, weeks and months.

There were also wide-ranging soccer questions from questions about the human rights and corruption issues surrounding the 2018 and 2022 World Cups to questions about diversity and inclusion of more women among the ranks of the FIFA executive committees to whether soccer will ever fully make it in the United States (note: I hate questions like the latter).

I was able to submit a question ahead of time that was proposed to Prince Ali (see photo below). With this question, along with a lot of questions that dove into the area of critical of FIFA’s governing structure or Prince Ali’s specific plans to clean up FIFA, the presidential hopeful was fairly general in his comments but otherwise dodged really answering those questions posed to him. He did make mention that he desired a way to include fans in the process of cleaning up FIFA and pitching ideas to make the game of soccer grow around the world. He also was adamant in his belief that the best person to clean up the embattled organization would come from within and should not be an outsider. Finally, he is a supporter of the “One Nation, One Vote” structure that has been controversial among fans.

One of the final questions of the event that had the room buzzing was whether Prince Ali expected the U.S. Soccer Federation to publicly throw their support to him in this election as they did in the previous election. Prince Ali said that they had not publicly supported him so far but was hoping for his support. It was clear from the attendees in the room that the U.S.S.F. was likely waiting for all the dominos to fall in the FIFA corruption scandal.

Prince Ali bin Hussein is the likely frontrunner to win the election to replace Sepp Blatter as FIFA President in February. He has also been the most visible of the candidates even as investigations into the organization and the surrounding confederations and national football associations continue. It will be interesting to see if other FIFA presidential candidates will also make their way to the United States to state their case to the world. One thing’s for sure: this presidential candidate will debate the others anytime, anywhere.