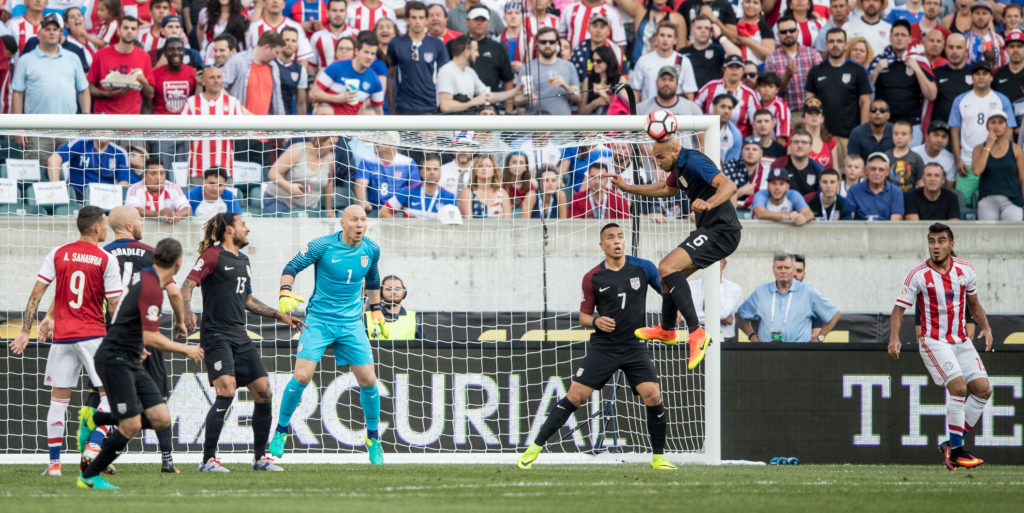 USA went up in the 27th minute of the first half after Gyasi Zardes beat his man down the flank and made a smart pass to Clint Demspey that he slotted home for a 1-0 lead. The lone goal proved to be enough even with USA playing down a man for the majority of the second half after DeAndre Yedlin saw red after a second yellow card in the 47th minute. John Brooks and Brad Guzan led a stingy, smart defensive effort that saw the NATS record their second clean sheet in Group A.

John Brooks put in one of the best performances I have seen in a USA kit in years.

I have spoken about Brooks’ efforts earlier in this tournament. He has been our best player and Sunday, his performance was central to our 1-0 victory. Brooks made so many clearances in the box that my eyes would strain to him on every set piece Paraguay took. Of equal importance, he managed to avoid a yellow card which would have left him out of the USMNT lineup and suspended for the Quarterfinal match. Guzan was strong on his line and has delivered as our #1 keeper.

It has been years (decades?) since USA has worried about our starting goalkeeper. Tim Howard and Guzan both struggled in their respective EPL campaigns this past year. It appeared that Coach Klinsmann went with Guzan in part because of Howard’s sabbatical away from the national team post the 2014 World Cup in Brazil. Guzan delivered tonight with a pair of critical saves late in the second half that sealed our victory USA is keeping it simple with a 4-4-2 and playing sound soccer.

Klinsmann has come out in a 4-3-3 in all three Copa matches, but the formation has been abandoned in the first half of both the Costa Rica and Paraguay matches. The 4-4-2 makes sense with Dempsey being in the 11, he is more comfortable playing off another forward and ill suited for a 4-3-3. Zardes’ touch has eluded him at times, but his work rate and pace are considerable. Right now, simplicity is working for USA.

No one thought USA was going to win our group when the day began, but the NATS’ grit coupled with Colombia’s slip means we will be playing on Thursday night in Seattle. Our opponent will be a Conmebol side from Group B, Ecuador, Peru, or Brazil. What we do know is that our support will be coordinated and large, as many will concede that the Pacific NW invented soccer support. Just kidding fellow AOs, I’m looking forward to seeing you all next week.